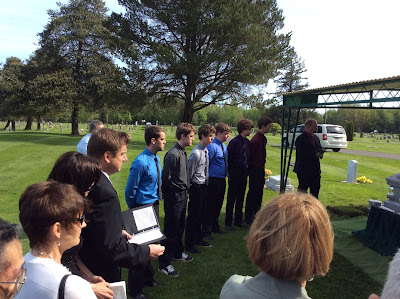 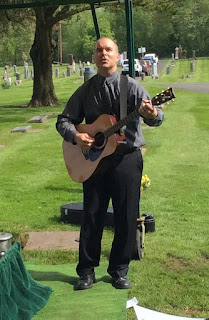 "He leadeth me, O blessed tho’t!
O words with heavenly comfort fraught!
Whate’er I do, where’er I be,
Still ’tis God’s hand that leadeth me.

Lord, I would clasp Thy hand in mine,
Nor ever murmur nor repine,
Content, whatever lot I see,
Since ’tis my God that leadeth me!

And when my task on earth is done,
When, by Thy grace, the vict’ry’s won,
E’en death’s cold wave I will not flee,
Since God thro’ Jordan leadeth me." 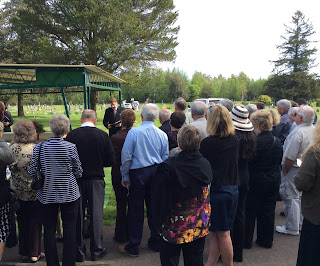 Although it is an honor for me to be with you today, I wish I wasn’t.  At least not for the reason that brings us here today.  I say that obviously, because death hurts.  It’s sobering.  It ushers in loss oftentimes when we are most unprepared for it.  Death also confronts us with our own mortality. Try as we might, in our own culture, to stave it off, we can’t.  When we speak of death, if we speak of it at all, we do so in terms that attempt to soften it, or lesson its blow, or smooth it out, so to speak.  But death is what death is. 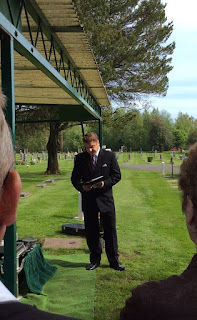 The Bible tells us that in death we see the apex of sin, of the extreme of sin and the sin that has wrapped the cosmos.

The Bible speaks of death as the enemy, the enemy that often brings fear and bondage, but interestingly and wondrously, the Bible also speaks of death in positive terms.  Solomon who wrote the book of Ecclesiastes, speaks of death as that which reminds us that there has to be something more than what we see around us, and therefore it should propel us, at least it should, toward that which is so much grander and more marvelous than the here and now.  Yet it reminds us both positively and negatively, depending on where you stand right now, that there is more to what we see and experience today, calling us to consider such things in the shadow of eternity.

The apostle Paul writes in I Cor. 15 that death is swallowed up in victory.  “O death, where is your victory?  O death where is your sting?  The sting of death is sin and the power of sin is the law, but thanks be to God Who gives us the victory through our Lord Jesus Christ.”

What the Bible promises to all of us and continues to promise to every one of us today is that those who put their faith and trust in Jesus, Jesus' victory over death will be theirs, too.  It will be given to us, imputed upon us, and therefore, what I also feel compelled to share with you today is that all those who know Jesus personally no longer need to fear death.  Fear at a time like this is altogether different from sadness.  Death brings tears and mourning.  It should.  Yet what it no longer needs to bring to those who know Jesus personally is fear and hopelessness.

For what the Bible teaches is that when death finally closes the eyes of those who know Jesus, in a twinkling of an eye, they open again and gaze into the eyes of Jesus!  They move from a place of faith to a place of sight, from believing in Jesus and having a faith in Jesus to seeing Jesus.  It’s fabulous!

By the way, the only thing that gives me assurance that I can shed tears on a day like this is that no one cried more than Carlin.  I feel a measure of assurance in that.

Paul writes this in II Cor. 5:  “For in this tent (speaking of our bodies) we groan, longing to put on the heavenly dwelling, for while we are still in this tent we groan, being burdened, where there is wishing, wishing that what is mortal may be swallowed up by life (speaking of eternal life).  He who has prepared us for this very thing is gone, Who has given us the Spirit as a guarantee so we are always of good courage.  We know that while we are at home in the body we are away from the Lord.  For we walk by faith, not by sight.  Yes, we are of good courage, we would rather be away from the body and at home with the Lord.  To be absent from the body is to be present with Jesus where we see Him face to face.”  And what Paul says is, that’s better by far!

Carlin was my boss.  Great boss.  He was my pastor.  I always call him Pastor Carlin, even when I stopped working for him.  He was my mentor.  He was my friend.  But far more important than any of these, he was a friend of Jesus, a co-worker with Christ, a child of God.  And because of that, having gazed into the eyes of Jesus, he has become like Jesus, for he now sees Jesus for Who He is.

Paul writes in Romans 8:  “In all these things we are more than conquerors through Him Who loved us, for I am sure that neither death nor life nor angels nor rulers, nor things present, nor things to come, nor powers, nor height nor depth, nor anything else in all creation will be able to separate us from the love of God in Christ Jesus our Lord.” 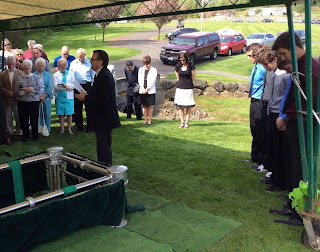 How can you become a conqueror?  I mean, what does that mean?  How is that possible?  Well, it’s possible when you don’t just get through something, but you use that something for God’s glory.  As I said on the front end of this today, I regret this thing that brings us here today, but in that regret, I am also joy filled, for it is being used to bring glory to God and is also being used by God to bring a child of God into the presence of His glory.  We are more than conquerors over death, because of Jesus.

The last time I talked to Carlin was by phone, while I sat by myself in a restaurant in Vancouver.  He shared with me that, barring a miracle, he was going Home to be with the Lord.  In the midst of that conversation, I was reminded that he was prepared to go, was confident of where he was going and believed that his heavenly Father would welcome him Home.

With that in mind, I am compelled to ask one more question this morning, and that is, are you?  Are you?  Death is hard.  I wish I could say it a different way, but I can’t.  It’s hard.  But Jesus is bigger than death.  He destroyed it.  He offers this victory over it to us if we but come to Him.
Amen.

Song: "The Name of the Lord is a Strong Tower,
the righteous runs into it and they are safe.”
It’s an old song, but for some reason I always think of Carlin with this song because, well, if you ever stood beside him in church you had to work to keep up with him.  Carlin loved to sing.