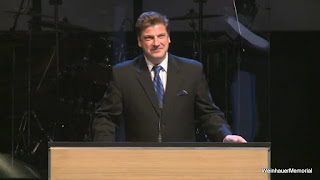 I remember the first time that I preached on a Sunday morning here at Willingdon. I was the high school youth pastor. I preached a few times in the evening, but Sunday morning was a different beast. This was the big time, alright. You speak and teach to the masses and at that time there were two services and I remember when I finished the first there was a bit of a break between the first and the second, and I had a chance to kind of take a breather.

Just some open confession here. I was feeling pretty good about myself after the first and kind of took a break. Came back and sat down in the front pew. We had pews here at the time. I sat down and I was kind of revelling in my self-glory, waiting for the second service. There was two at the time. Revelling and readying myself for the second and all of a sudden Carlin plopped down next to me, kind of sidled up close and I was ready for the accolades, just ready for the accolades. Things like, you know, “great job.” Things like that. Kind of a 21st century Charles Spurgeon type of accolade, thank you, things like that: “We’re really lucky to have you on the team.” You know, just obvious stuff, right?

I got none of that though. What I got was a guy that sidled up close to me and said, “You ever thought about voice lessons?” Well I was perplexed. I said, “Voice lessons?” He said “Yeah, it’s really hard for people to listen to a high voice for a really long period of time.” Wow. Wow. I mean men love hearing that kind of stuff. We just love hearing it. Yes, please, more, I want more of that. Mr. Son of encouragement. Thank you for your criticism. I kid you not. I got up for the second service and I began this way. “Would you take your Bibles out?” I was trying to be Herb Neufeld. I don’t know if Herb is here. Is he here? I was trying to be you, Herb. I was like, man, Herb. I need a little bit of Herb. I didn’t have that. I have more of a Ron Clark in me. Good to see you, Ron! Not that high.

Besides my dad…besides my dad… I said yesterday at the graveside, if I learned one thing from Carlin it was how to cry in public, and so I thought I was done yesterday, but it looks like they are going to continue on to some extent.

Besides my dad, there is no man I respected more than Pastor Carlin. My pastor, my mentor, my friend, my boss. I had the great privilege of working for and with Pastor Carlin for almost ten years at Willingdon before he moved on to MB Missions and I went to plant the church I now pastor. Time doesn’t allow me to share all that I could and would be able to about Pastor Carlin. Many of us already touched upon, several of us can readily quote our favorite Carlinisms. It’s amazing how we’ve all sort of shared that. Some of mine are different from the ones I’ve heard already. Things like, “Give yourself to that which will matter a hundred years from now.” “We aren’t smart enough to figure this stuff out on our own.” “The way up is down.”“The Bible is meant to be a layman’s book.” “Ninety percent of ministry is just showing up.” “Let’s just figure out where God’s wave is and ride it.” There are many more.

If you’d allow me just a few minutes, I’d like to use that time to share two things from among many that I learned from observing Pastor Carlin. And one thing I think he’d want us all to hear. The first thing is, from observing Pastor Carlin, is that being is far more important than doing. As I said, I worked for Carlin for ten years and if you were to ask me how he led Willingdon during those ten years, I would say without hesitation, without hyperbole, he led this ministry from his knees.

And let me add that no ministry is better led than when it’s led from one’s knees. I truly believe that Carlin enjoyed his pray closet more than his presence at the pulpit, which is something you can’t say for many. He enjoyed so much more what the Father saw in secret than the opiate that can so often come by way of the main stage. Carlin left Burnaby most every Sunday night with Marcia heading to Birch Bay where he spent Monday in rest and prayer, considering the upcoming weekend’s ministry. Then, Tuesday in the Word. He would then come back early on Wednesday morning for prayer

He would then spend an hour prayer that he would constantly invite resistant staff to on Wednesday afternoon. In addition, he would often pray one-on-one with staff. He would pray through the offices. He would pray for our kids. He knew all the kids of the staff’s names. He would pray through the Willingdon directory every year. He would be most joy-filled at elder meetings at the beginning, during the time of devotion and prayer. He was the one, if memory serves, who was the biggest proponent for prayer counselling at Willingdon. I count on one hand the times I left a meeting where Carlin didn’t pray for me first before I left.

The last time I talked to Pastor Carlin was a couple of weeks ago by phone while I sat by myself in a restaurant in Vancouver, and he told me in that conversation that, barring the miraculous, he would not recover from cancer. The cancer that he had. I wept. However, before hanging up, the last thing that he ever said to me was without surprise. “Hey guy, I won’t let you say goodbye without praying for me first.” So I did, and I prayed loud. I prayed loud, and I didn’t care. I prayed loud and they didn’t know what was happening, this crying, praying guy, and I prayed loud.

I observed that in Carlin. That being is far more important than doing. The second thing that I observed in Carlin is that it is far more blessed to give than receive. As we know, Pastor Carlin passed away on April 19th, but it’s important recognize that he died many times before that. Not only did he die to self when he willingly gave up his pulpit and asked Pastor John to take over, but he called others to do the same. He called Bill Klassen to die to self which opened up the door for Ron Clark, with much fruit as the result, but it takes a seed dying first for a harvest to be enjoyed later.

It was his example that I seek to follow. It’s an example we all should. Few things are more Christ-like than when we consider others as more important than ourselves. Carlin didn’t just teach this; he lived it. I said to him several times over the years when we would meet for coffee or lunch, and I did this when I surprisingly brought him up on stage at Westside a couple of years ago, that everyone now who makes up the ministry of Westside is your grandchild in faith.

If those are the two things that from among the many I learned and observed from Pastor Carlin, let me finish by saying one more thing. I think he’d want us all to hear and it’s something that Pastor John spoke of first off, and that is he is not to be the hero of this memorial. Jesus is. Please hear me on this. It is okay to commend those in ministry. It is okay! The Apostle Paul commended individuals like Timothy and Epaphroditus and others, from among others. The writer of Hebrews mentions the unnamed for which the world was not worthy. It’s okay to commend and give praise to those who give their lives to ministry in the Bride of Christ. However, in the same way that Paul said, “follow me as I follow Christ,” so too, I believe that Carlin would say that, “any accolades that come my way come from the grace of Jesus as I followed him,”and rightly so. For what gives us hope today, in the midst of our mourning, doesn’t come by way of Carlin’s great life, but Jesus’s wondrous death and his defeat of it.

We aren’t to deify Carlin today. We are to thank our Deity for His gracious gift of Carlin. We mourn with tears today, but tears interwoven with joy because of Jesus. I love Carlin. He was a great man, but he wasn’t perfect. In fact, he was a sinner, but Jesus paid sin’s penalty for his and our sins when He died on the cross and overpowered sin’s power, and when He raised Him from the dead. Jesus is today’s hero and Carlin, like all of us can be, was a benefactor of Jesus’s heroic act. I believe with all of my heart that Carlin would want us to hear that today.

One last word and that is to Marcia. As great as Carlin was, he could barely hold a candle to you. You are the epitome of a godly woman, and pastor’s wife. If I had a loonie for every time someone said, “You know Carlin’s a great guy, but Marcia is beyond wondrous,” I’d probably have enough money to buy Ron Clark a third boat. Or is it fourth? Fourth boat…

I love you, and I am so sorry for you and your daughters, and the rest of your family. Much grace to you. Amen.