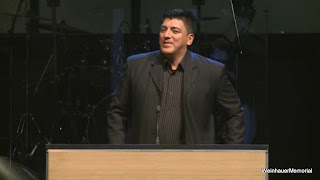 Hello, my name is Ricky. I bring you greetings from Thailand. A place where, for some reason, this guy from New York and from the prairies liked to go visit. I’m a stats guy, so I’m just going to fill you in really quickly on what Carlin did. He travelled – this is just for Thailand. He went there fifteen times. Two hundred and fifty thousand air miles, and within Thailand. That’s three hundred and sixty flying hours. That works out to if you were just on a plane for fifteen straight days. That’s what Carlin did coming to bless us in Thailand. So he spent approximately two hundred days in Thailand and I was probably with him – I was honoured to be with him - for most of those days.

My dad passed away when I was young and Carlin became a spiritual dad to me. Every time he got off the plane, we had a big bear hug, and we’d just talk about life. Often he’d ask me right away, the first questions were “How’s your marriage?”, “How’s your walk with the Lord?” and he challenged me over and over and over.

There’s a lot of Carlinisms we’ve heard. I’m going to give you some that aren’t so spiritual, because he had a lot of good ones. He heard this one from one of the builders when we were building an orphanage in Thailand that my wife started, and that word just became part of his vocabulary. Every time he didn’t get something, the builder would say “that’s a bunch of jiggery-pokery.” I still don’t understand what that means, but now we’re using it in Thailand. Another one he said was – we often go up to the north to visit the Khmu tribe you saw on the video and he didn’t like the small planes because they had a lot of turbulence and he’d say to me, “Ricky, do not put me on that vomit comet again! Pay the extra 10-15 dollars. We’re not going on that vomit comet!” And my favourite one, this is the last one – we’d had a number of people arrested; our pastors… Khmu pastors in Laos – fifteen of them. He brought a whole bunch of guys like he often did. These trips, by the way, it wasn’t just Carlin. Marcia, we are glad you came on a few of those. We know those trips are not easy, but he often brought people, lots of people that normally wouldn’t go on missions trips, and he got people involved, as well as givers and supporters. So we’re standing overlooking Laos and he says, “Okay boys, you’ve heard the stories. Fifteen of them. The commies have got our boys, let’s pray!” Only Carlin could get away with that one! And we prayed and prayed, and I don’t think we ever stopped praying.

I had a note here from my wife. He had a lot to do with our orphanage. It’s an HIV orphanage called the Abundant Life Home in Thailand. Here is what Ganega said. Ganega is my wife’s right-hand woman and Carlin loved Ganega. He just thought, “Oh man, she’s just got so much life!” She said this – and we translated – “We want to tell you, Marcia, that all the kids and moms at ALH watched the video of Carlin on Facebook.” …The one we just saw here… “And it made us feel like Carlin was right here with us again. We still don’t really believe he won’t be coming back to see us and pray for the children and encourage us. He has come to visit us and the children twice a year. He watched the kids grow up and every time the kids or moms would share their testimony, he would tear up and cry. We knew he loved us, especially the kids. I am so glad that he went quickly without too much suffering. That is how I hope to go when it is my turn. God was merciful to him. Right now I’m so happy that Carlin is up in heaven with Jesus and we can’t wait to meet him up there one day. Thanks, Marcia, for always letting him come visit us…Ganega.”

And this is from my wife. “First of all a big thanks to Marcia for coming to Thailand with Carlin and releasing him to come so often. I am so grateful for Carlin’s friendship in my life. He always took time to encourage me and keep pressing on to see the Thai people saved. He loved the Thai people and had a very soft spot for the children at ALH. He was very emotional around them and it was hard for him not to be able to speak Thai to them. He had so much he wanted to share with them. One special memory I have of Carlin is watching him sing. He loved to sing and every time I would have him pull together his team to have them sing a few hymns at the church. Often the men on the team had never sang before and could not sing, but he pulled them together and his voice boomed over all the rest, covering all the bad voices in the group. The men often tried to talk him out of having to sing, but Carlin would never have it. No matter what I asked from Carlin, he would laugh and say “Sure!” 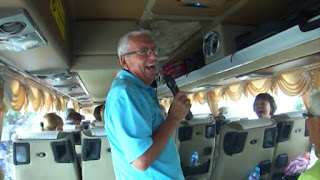 “On the last tour in Thailand in October, he had the mic on the tour bus,” and we saw that there, “and he would interview me while people were trying to sleep. I just could not turn him down. He was like Elvis on the mic. I miss him already. I miss seeing his name calling on Skye. All the times his voice praying for us. He did a lot for ALH. He brought many prayer supporters and donors, who still give and pray today. I will never forget him.”

I leave you with this, because this is the last one, and you know he loved Colossians. This is the last one he gave to me. I called him, incidentally from Thailand, a couple of weeks before his passing and it was only like Carlin. He says, “Ricky, I think I hear the chariots are warming up!”

This is Colossians 4. “Devote yourself to prayer, being watchful and thankful; and pray for us, too, that God may open a door for your message, so that we may proclaim the mystery of Christ, for which I am in chains. Pray that I may proclaim it clearly as I should, be wise in the way I act towards outsiders, make the most of every opportunity. Let your conversation be always full of grace, seasoned with salt, so that you may know how to answer everyone.”

That’s the legacy he left in Thailand. Marcia, on behalf of all the missionaries, 28 HIV orphans, we thank you. Thank you to your family for allowing him to come all those times. I know he often talked about you and he said “This trip was perfect except that you weren’t there.” We’re going to miss him deeply. And the last thing is, I think he was part-Latino, because – and don’t worry he didn’t dance like Latino’s dance, but any time there was a baptism… this is the picture I hold with me. They’d go down and I’d be there, and we’d be hugging and he had this little two-step, “Oh thank you, Jesus!” Thank you.