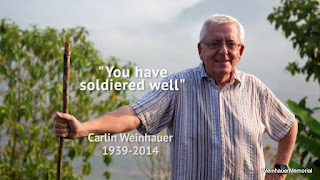 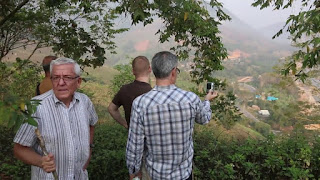 Our dear friend, pastor and mission leader Carlin Weinhauer entered the presence of the Lord on April 19, 2014. His cancer was diagnosed 6 weeks ago and ‎the end came quickly. Our mission family has been deeply impacted by Carlin over the past 10 years that he served with us. Carlin joined MB mission in his retirement after a long and very fruitful ministry at Willingdon. He brought his love for prayer, the Word and missions to our lead team! He was a mentor to me personally and to our mobilization team as he launched Celebrate Mission nights across North America, numerous vision trips, and ‎more recently our Thailand development building projects. We will miss his God given passion for life and all things eternal. Carlin was a leader who finished well!
Randy Friesen: 11:03:26 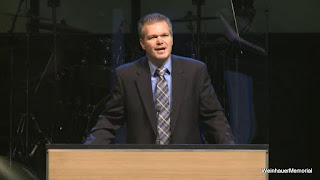 Ten years ago when God brought together a team of younger leaders to lead MB Mission into its next chapter, He also brought us a man of God, a mentor to just point us back to Jesus; keep us on the right path and also pour into our lives this legacy of forty years of ministry, and all that God had taught him. We are so grateful for the gift that God gave us in Carlin. Our team loved him. We loved him for his enthusiasm. We loved him for his wisdom and his incredibly positive outlook on life, and we, too, sort of gathered our list of Carlinisms.

“Prayer is the work of the kingdom,” he often said. Prayer is the work of the kingdom. So our team started gathering on Wednesdays for fasting and prayer. We’d get on our knees. Carlin loved being on his knees, with other men, calling out to the Lord. He understood what it meant to set your heart to things above where Christ is seated at the right hand of God. How many times did I hear him say, “We’re not smart enough to figure this stuff out; another reason to prayer.”

We’d often hear him say that “Starting slower would get us there faster.” Leadership consensus was a huge value to Carlin. He loved the church and he believed that God spoke through the church. When there were times when the outcome wasn’t exactly the way he wanted it to go, he’d say, “that’s a lot better than a poke in the eye with a sharp stick. It could be a lot worse!” And he kept things in perspective when sometimes we were a little disappointed. As we’ve already heard, he would say, “Let’s keep big things big and little things little. and ask God every day to show us the difference.” “Let’s figure out what’s really important: The word of God, prayer, the gospel… these things were big. ”Most other stuff was little.

He loved Marcia and she was a huge priority. He talked about her all the time, and we knew that family was a huge value in his life. It was always easy to know where Carlin’s priorities were. He had a very clear set of priorities that anchored his life. 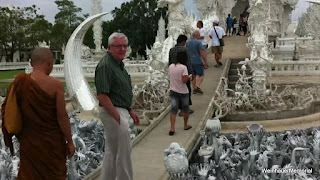 “I don’t like jumping”, he’d often say this. “I don’t like jumping over the chasm twice or cutting the cat’s tail more than once.” We finally figured out what he was talking about was when you’re going to pay a price for leadership decision making, be decisive, and do it right the first time. And so, that gave some of us younger leaders courage in some of those challenging discernment seasons.

“He’s busier than a one-armed wall paper hanger.” I still don’t know what that means. I don’t know. Maybe some of you can help us, but it seems like a fairly apt description of how Carlin loved to live his life. He was a man on a mission. He was in in his 70s and leading mission trips, as we’ve heard, to Thailand, India, Nepal, Africa, South America. I think 15 or so in all to Thailand, keeping a legendary pace, reminding us what a privilege it was to serve the King. Carlin and I had the privilege of serving together, doing Celebrate Mission Nights, across North America, calling our churches to the mission of Jesus. And this godly man with a lifetime of experience, I’d get into a room, sometimes late, and he’d get there with a different itinerary. I’d get to the place and he’d be hanging pictures. He’s be up on top of an eight or ten foot ladder, and I’d say, “Carlin get down. Get down from there. What are you doing?” He’d be hanging up these huge pictures of faces of people who have responded to the Lord around the world. He would hang these pictures as part of the art background to the mission nights, and there was no job too small for him. He was a servant. He would take the first opportunity to serve others and I just learned so much about that from him.

He inspired, counselled thousands of leaders, contributed to the building of training centers, churches, the HIV orphanage in Thailand – you saw some of the photos there. He was my friend and he was a mentor to me. He understood the challenges of leadership. He went out of his way to encourage me, to pray with me, and other leaders at MBMission. He was a humble man of God, who deeply imprinted the DNA of our mission. He ran straight through the finish line.

I just want to say a huge thank you to Marcia and the family. Thank you for sharing your husband and dad with us. In his retirement, he could have been spending time with you and you shared him with our global family. Thank you.

I think of this saying that was quoted in some of the last emails. “When Christ Who is your life appears, then you also will appear with Him in glory.” Carlin had a phenomenal sense of timing, and on resurrection Sunday, I don’t know of any place that he would rather be than in the presence of the Lord. We look forward to seeing him there soon.

In honour of Carlin’s legacy, we’ve established the Carlin Weinhauer Memorial Fund to encourage church planting and leadership development in least reached countries. We want to say thank you for leaving a legacy and sharing this man of God with us. We are grateful for all that God taught us through him. Thank you.
http://www.mbmission.org/witness/summer-2014/fishing-for-people