In Light of Eternity

God is so good, giving us gems and reminders of His tender love!
Two nights ago we finished the little book, In Light of Eternity by Randy Alcorn.  In those last pages he tells a story about a painting he has hanging in his office.  With his permission, I am passing the blessing on to our blog friends. 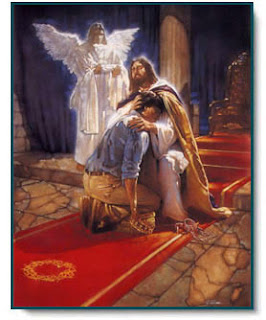 “On my office wall hangs a beautiful painting by Ron DiCianni.  It’s entitled Safely Home. . .The painting portrays a man on his knees.  His clothing is worn and tattered.  He’s walked down a long strip of blood-red entry-carpet that has led him to the foot of a throne.
The man’s arms dangle at his side.  He appears both exhausted and relieved, overcome with emotion.  His head rests on the chest of one kneeling down to him, holding him tight in a loving embrace.  The one hugging him has stepped down off the throne.  It’s the King, the Creator of the universe, who is also, incredibly, a man.  King Jesus.
A few feet to the right are open shackles lying on the palace floor.  The man had been a prisoner on earth.  He’d suffered terribly at the hands of those who despised him because they despised His King.  In his right hand, hanging limply to the ground, is a beautiful gold crown.
The man is a martyr.  He has lived out Revelation 2:10 — He’s been faithful unto death and his Lord has given him the crown of life.  To many, the single most important thing is the preservation of their life on earth.  To this man, obeying his Lord was more important than prolonging his earthly life.  He’s one of those who ‘did not love their lives so much as to shrink from death’ (Revelation 12:11).
In the background of Safely Home stands an angel, reverently watching, holding out in his arms a white robe.  The angel is the man’s guardian.  In the stonework on both sides of the carpet walkway you can see the continents of earth below.
Several things strike me in this painting.  One is heaven’s view of earth below.  Another is the look on the man’s face, at long last freed from pain and persecution.  But what really strikes me is the look on the face of King Jesus.  He, too, is full of emotion.  His face radiates compassion and approval.  His nail-scarred hands drawing the martyr to himself, are silent testimony to the extent of his love.
Ron could have named the painting Well Done or Overcomer or No Longer a Stranger or something else.   But he named it Safely Home.  This man who has endured great suffering is safely home at last.  The evil that pursued him in the Shadowlands can no longer touch him.  He’s forever beyond its reach, for between evil and the man stands the Lord of the Cosmos, the one who embraces him and says, ‘Never again will I let you suffer..’
At the moment this is going on in heaven, I imagine down on earth a wife and children, perhaps a mother and father, a church of faithful believers.  They’re agonizing, understandably, over what has happened to their beloved one.  At the very moment they’re overwhelmed with grief, the one they mourn is overcome with joy.  For he is home at last .  Home for the very first time.
To many people in the Shadowlands, this man has passed from life to death.  In fact, it is the opposite.  He has passed from death to life.  And one day his believing family will join him there.  Then the King will wipe away their tears too.
Regarding heaven, Scripture doesn’t just say, ‘there will be no more tears.’  It says God ‘will wipe every tear from their eyes’ (Revelation 21:4).  This isn’t God snapping his fingers and drying all tears from a distance.  It’s a very intimate picture—it means God’s hands will touch the face of each individual child, to remove every tear.”

I am so moved by this story,  not because I view Carlin as a martyr, but because the same Jesus, King Jesus, will embrace him, and will wipe away all the tears.  Perhaps tears from the suffering of growing up in a broken family with a father that rejected him, perhaps tears where he wished he had done more, any tears.  What comfort to know Carlin will fall into the arms of a Heavenly Father, what comfort that Carlin will experience complete love, and full joy.
It won’t be long now, our long time doctor friend, George says.
Thank you to all of you who have sent such fabulous, comforting letters.  Thank you to all of you who have stormed the gates of Heaven on Carlin’s behalf.
He sleeps a lot now—morphine and medications.
Love to you,
Marcia, for Carlin
Posted by Unknown at 10:13